Dr. Ludwig has been a practicing periodontist since 1984. He received his dental degree from the University of Pennsylvania College of Dentistry in 1981. Dr. Ludwig completed a general practice residency in 1982 at North Shore University Hospital and fellowship in Periodontics in 1984 at the University of Pennsylvania. In 1989, he earned his Periodontal Board Certification, diplomat status. He is a member of the American Academy of Periodontology, Academy of Osseointegration, Northeastern Society of Periodontists, Long Island Academy of Periodontics, American Dental Association, New York State Dental Association and the Nassau County Dental Society. 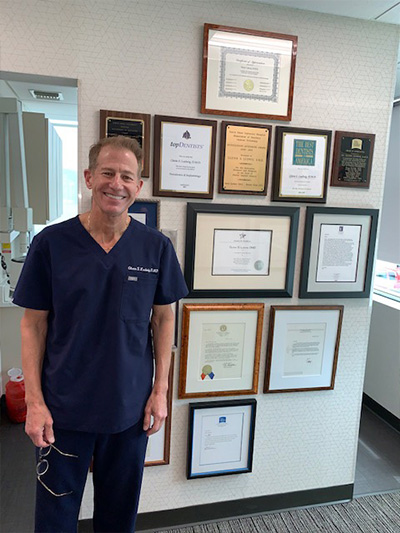 Through his many affiliations and extensive research, Dr. Ludwig continues to keep the Long Island dental community informed of any and all innovations in treatment planning. While maintaining a full-time practice in Plainview, Dr. Ludwig continues to teach as an attending physician at North Shore University Hospital, Manhasset New York, and at New York Hospital Queens, Flushing, New York. Dr. Ludwig has participated in, and lectured for, many study groups and dental schools including, but not limited to, Boston University and Stony Brook. In 1992, he founded and still directs the Greater Long Island Study Group (GLISG). This unique postgraduate curriculum offers continuing education to general dentists within local area. Under the guidance of Dr. Ludwig, the study group invites nationally and internationally known experts to discuss their findings on state-of-the-art topics and procedures. The GLISG is accredited by the New York State Dental Association and the Academy of General Dentistry. In addition, Dr. Ludwig publishes a quarterly newsletter, "Update on Periodontics", enabling him to share his knowledge of the most recently published literature. The newsletter is available to local practitioners who wish to benefit from Dr. Ludwig's expertise in comprehensive treatment planning.

Dr. Ludwig can be reached by email at gludwig@periosmiles.com.